Ian seeks to increase and diffuse knowledge while promoting the conservation of the world’s cultural, historical, and natural resources. His photos capture authentic moments that inspire awareness in others and foster positive change in our world.

Ian Chase Nichols is an emerging figure in the field of photography and conservation. Comfortable behind the camera, Nichols first began work in Gabon in 2003 with his father, Michael Nichols, who was in Gabon on a seven-month assignment for National Geographic magazine. While in Gabon, Ian volunteered as a photographer for the WCS Whale Team assisting Tim Collins. Photographing under difficult conditions proved challenging and successful as he developed a body of work as well as an aesthetic vision.

Upon graduation from the University of Virginia in 2005, Ian received a grant to study “naïve” chimps at a research site in Congo, where he spent one year photographing undocumented tool use.

In 2008, on assignment for National Geographic magazine, Ian photographed lowland gorillas in Congo. Patient and sensitive to the nuances of primate behavior, Nichols has captured rare glimpses into these great apes.

Ian has photographed biodiversity for the Smithsonian Institution in Gabon, Africa, and taken portraits of the orangutans at the new International Orangutan Center in the Indianapolis Zoo. He is also a member of the Photo Society.

Recently, Ian returned to Bioko Island to document the ongoing research and create a Public Service Announcement about monkey and turtle bushmeat on the island.

Currently he is pursuing a Phd degree in Biology at Drexel University in Philadelphia. Ian’s research focuses chimpanzee populations in Cameroon to understand the role of social dynamics and tools in evolution amongst great apes. 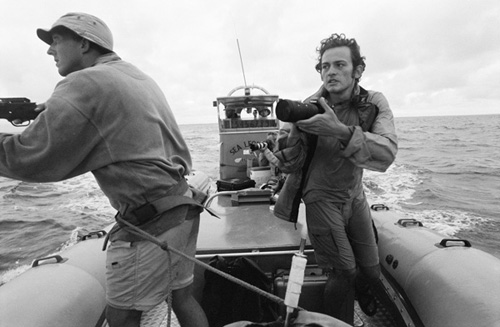